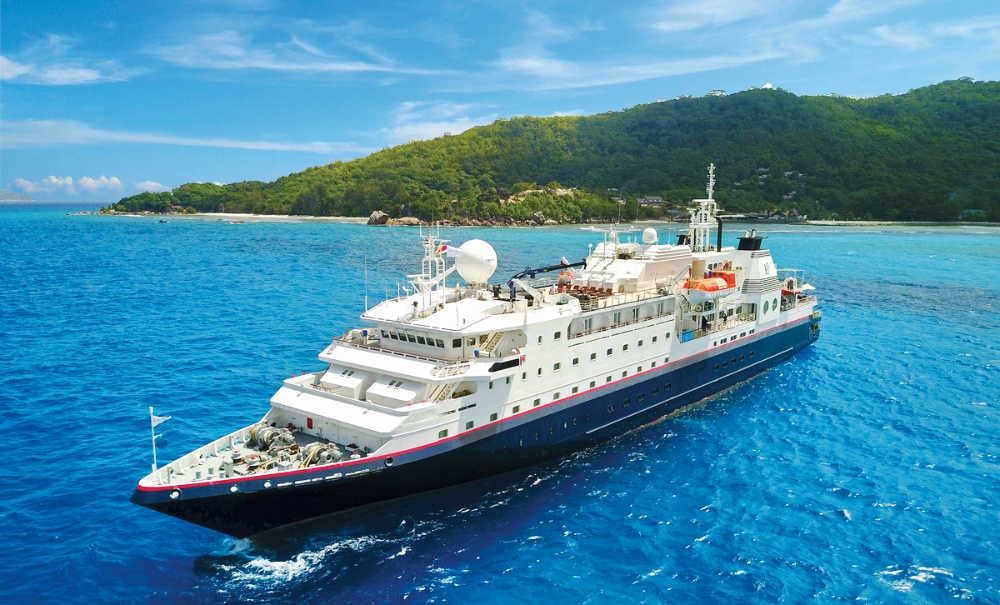 You’ll be transferred to the airport for a flight to Saint Pierre.(5) On arrival, we set out on a guided tour of Saint Pierre and the Arche Museum and Archives. Located at the mouth of the Gulf of Saint Lawrence,Saint Pierre and Miquelon is a slice of France in North America. Although there is evidence of prehistoric settlements on the islands, there were no native inhabitants when the Europeans began exploring the New World, and these islands were not spared the constant French and English battles from the 17th to 19th centuries. The French finally claimed victory in 1815, and French fishermen once again took up residence and created a prosperous market. Saint Pierre itself is a living postcard. During this tour, you’ll explore the museum and discover the history and stories of the archipelago through remembrances of the past. Later, we will board our ship at 6 p.m. After comfortably settling into your cabins, we’ll introduce our crew at a welcome cocktail and enjoy dinner on board

This morning, join us for an optional tour of L'Île-aux-Marins. We’ll take a tour boat for a guided visit of the wind- and water-ravaged island.(1) Although it once had a population of 700, there are currently no permanent residents. Time stands still at the abandoned settlement—a ghost town that includes a church, cemetery, school, and homes. Everyday objects and vintage photos found in the old school and several of the homes recount island life. After our tour, we’ll return to our ship and begin to cruise towards the Magdalen Islands and Cap-aux-Meules.

Our cruise will continue throughout the morning. The Magdalen Islands are a breathtakingly beautiful enclave in the middle of the Saint Lawrence River. Our ship will reach Cap-aux-Meules in the early afternoon. Capaux-Meules is known as the gateway to the archipelago. Join us for an optional tour of the island, beginning with the gorgeous scenery from the Hérissé Cape lighthouse and then moving on to historical Grave and the Fumoir d’Antan smokehouse, product shop, and Economuseum®. After we return on board, we’ll spend the evening cruising to our next destination.

We’ll spend the morning cruising, arriving in Gaspé in the early afternoon. Located at the tip of the Gaspé Peninsula, this is the location where Jacques Cartier took possession of New France in the name of King Francis I. We’ll set out on an optional excursion to Percé, the small city that sits directly across from the impressive sheer rock formation known as Percé Rock. We’ll take a boat tour around the beautiful, red-hued rock and continue to Bonaventure Island, a bird sanctuary containing the largest gannet population in North America during the summer months. Enjoy a stroll along one of the paths during our stay on the island. After our tour, we’ll return on board and begin to cruise to Baie-Comeau

Our ship will cruise alongside the Gaspé Peninsula this morning, before reaching Baie-Comeau at the beginning of the afternoon. Join us for an optional excursion to the Garden of the Glaciers and the Village Forestier d’Antan. The Garden of Glaciers is a giant leap back in time for an encounter with the last Ice Age. The multi-sensory experience tells the fascinating story of the dramatic climate changes that have affected our earth, the migration of the first people to set foot in North America, and the ancient Goldthwait Sea. We’ll also take in the views at the St-Pancrace Fjard Lookout. Our next stop will be the lumberjackvillage in Franquelin, where we’ll tour rustic log cabins and see the everyday items from the pioneer times. After our tour, we’ll return on board the ship and begin to cruise to Tadoussac.

We’ll arrive in Tadoussac early in the morning. Tadoussac is known worldwide for its beauty, scenery, and wildlife—whales, in particular! Located at the confluence of the two rivers, the colorful village only has 800 residents but is a major tourist destination nonetheless. Thar she blows! Take advantage of our optional whale watch and climb aboard a local boat to catch a glimpse of some of the most elegant mammals in the world. If you have never been on a whale watch before,this is the chance to live a truly unforgettable experience. After we return on board, we’ll begin to cruise on the Saguenay River. The Saguenay Fjord is home to an incredible array of wildlife and breathtaking scenery.Our ship will remain in port overnight

Join us for an optional excursion to La Pulperie, a regional tourism center dedicated to the arts and history of the city of Chicoutimi. Set within an old paper mill, the museum highlights how paper manufacturing played a significant role in the development of the region at the beginning of the 20th century. We’ll cruise backalong the Saguenay River to reach the Saint Lawrence, and our ship will cruise through the night.

We’ll arrive in Quebec City early in the morning. Join us for a tour of Old Quebec City. Cobblestone streets,charming boutiques, and the emblematic Château Frontenac await us! We'll visit Old Quebec on foot,stopping off at Dufferin Terrace to take in the spellbinding views of the river and castle before heading over to the fairytale-like Petit-Champlain neighborhood.

In the afternoon, join us for an optional excursion to the Île d’Orléans, where farming is active year round.We’ll set off on a countryside stroll that includes a bite of some local, tasty products. The island was one ofthe first French colonies, and a large percent of French Canadians can trace their heritage back to the Îled’Orléans. Although fishing and boat construction have been abandoned here, its rich history and gorgeous scenery make it one of the top tourist spots in the region. We’ll also stop off at Montmorency Falls and takein a spectacular view of the crashing waters. This evening, our ship will begin to cruise to Montreal.

We’ll arrive in Montreal early in the morning. Join us for a guided tour of Montreal this morning to see the city’s musts and get a feel for its outstanding diversity. In Old Montreal, we’ll see Saint-Paul Street, Place Jacques-Cartier, and the outside of the Notre-Dame Basilica.

In the afternoon, we’ll set off on an optional panoramic visit and guided tour of this sophisticated city for a different view. We’ll drive along Saint Catherine Street—considered the main cultural and commerce artery in the downtown area—prestigious Sherbrooke Street, and through laid-back Plateau-Mont-Royal.We’ll have a tasting of some Montreal-style smoked meat before spending some free time in the Jean Talon farmer’s market—one of the oldest public markets in the city, situated in the heart of Little Italy. After our tour, we’ll return on board the ship. Tonight, we’ll enjoy our gala evening.

Enjoy breakfast on board this morning before disembarking.